The battle took place on Aug. 5, 1944, as the lead tanks of the 6th Armored Division rolled through the wooded countryside to Heulgoat, a village of 2,000 people. The tanks ran into minefields, stalled and came under German rocket and artillery attack. Eight men were killed, mostly by machine-gun and sniper fire as they fled their disabled tanks.

At nine thirty on the fifth of August, CCA resumed its westward trek under the command of Brig. General James Taylor. Then east of Merdrignac, Company "C" was fired on by organized sniper fire from a trench system. , The company immediately returned fire, killing five enemy, and wounded many others. When the head of the column reached Huelgoat, Lt. Col. McCorrison was ordered by the Division Commander to clear the town, and two platoons of Company "A" were ordered to support one company of the 44th in accomplishing this mission. This force closed on the enemy in two directions and drove them into the northern end of the town. At this point, resistance grew very stiff, and the task force came to grips with the enemy at close quarters. One tank was hit by Panzerfaust fire at a very close range, and was set on fire. However, the tank crew remained inside and continued to machine gun the krauts until the heat became unbearable; crawling out of the vehicle they found themselves su;rrounded by Wehrmacht troops who called to them to surrender. Unanimously they refused, and immediately opened fire on the group in the face of overwhelming odds, and almost certain death. Technician 5th Grade, Santo De Nunziato, Fred K. Blaylock, were cut down by machine gun fire. Nunziato was immediately killed and Blaylock died of wounds later in the hospital.

Technician 4th Grade Charles E. Pidcock continued to fire his sub-machine gun at close range until his tank exploded, and threw him into a nearby hedgerow. The enemy had been dissipated; all three tankers were later awarded the Silver Star for their gallantry in action. After the above action the column passed through the town of Huelgoat and bypassed the fighting. Company C commanded by Captain Daniel E. Smith was ordered to relieve Company A as part of the advance Guard. The actual transfer, however, did not take place until next morning, and that night enemy patrols infiltrated through a company bivouac area in the forward area, throwing grenades and causing one casualty before being driven off.

General Grow was not afraid to take chances and expose himself to danger. On 5 August 1944 in the dash to Brest, the General augmented his jeep and halftrack with two tanks borrowed from Combat B which was moving toward Brest on the northern route. The addition of these two tanks gave a measure of security as the General moved from the northern route to join CCA on the southern route. This decision meant traversing some 15 miles of enemy territory knowing the possibility of running into enemy contingents who would be retreating to Brest.

Upon arriving at the lead elements of CCA, he felt the column was moving too cautiously and decided to lead with his own four vehicles in advance of CCA to Huelgoat. The two medium talks arrived at Huelgoat around 1130 on 5 August. As the two tanks maneuvered through the obstacles leading to the center of the town, a towed artillery unit of three guns and approximately 40 enemy hastily departed out of the town heading west. A reconnaissance of the NE route into the town by the two tanks revealed a bicycle Infantry unit of approximately 50 enemy. Upon seeing the tanks, they hastily abandoned the bicycles and fled to the woods. General Grow was aware that there were enemy surrounding the town and very likely within the town; nevertheless, he remained in the town until late afternoon when he departed and joined CCA. During this time, the enemy initiated no contact. The General's concern for his own safety was based on his belief that the enemy was more concerned with retreating safely than getting involved in a fight. The only casualty was a shoulder wound received by the FFI guide in our party. I believe the shot came from a Frenchman, not a German. The FFI guide was standing in the middle of the street and for some reason started celebrating by shooting his weapon in all directions, thereby causing some danger to the inhabitants who had remained indoors. 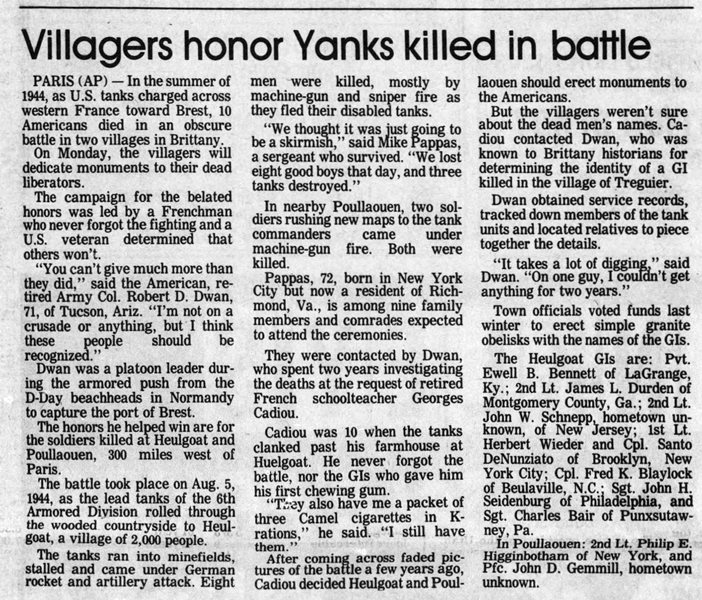 On 5 august 1944 Charles BAIR  was a tank driver for one of the tanks chosen to escort the commanding general from one combat command to the other combat command .,Upon arrival they found  the second combat command was having difficulty taking a village near Huelgoat. The two tanks were ordered to assist in the attack. During this attack Tec 4 Bair'’s tank was knocked out by an enemy 88 mm anti-tank gun, resulting in his death. The advance continued and Charles Bair was listed as missing in action  The French recovered his body and buried him in the churchyard at Huelgoat.

SGT John Seidenburg was a tank commander in the 3rd Platoon. In Huelgoat his platoon was fired on by a German sniper. The men  took cover in their tanks. John raised his head to spot  the sniper who fired again and narrowly missed him. Outraged, he courageously exposed himself to fire at the sniper with the tank's .50 caliber anti-aircraft machine gun. The sniper's next shot killed John with a bullet  in his  head. 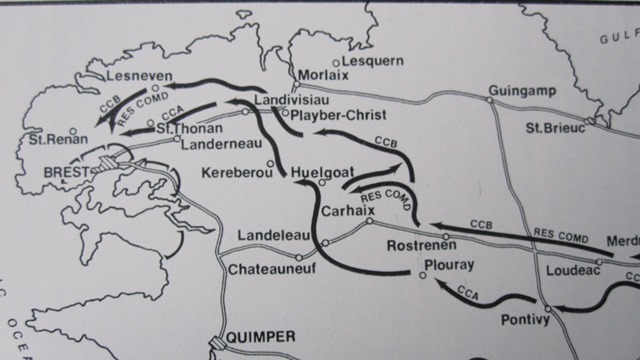 All elements  of the dvision continued to march west, encountering very light resistance. During this period the French Forces of the Inferior (FFI) began to come out in the open and proved to be of value to the division as guides and information agents. On 5 August CCB bypassed the east of the town CARHAIX which the FFI reported was heavily defended by two thousand German Paratroopers of the 2nd Parachute Division.

With the enem's disposition in mind, the Division Commander borrowed two medium tanks from the 69th TB, CCB, to escort him across country so he could get ahead of Taylor's column before it stumbled into CARHAIX. He raced thrpugh HUELGOAT and then returned and positioned himself on a hill in order to facilitate radio contact. In short order he established radio contact with Taylor who was "so damn far back". CCA was then ordered to bypass CARHAIX to the west and head for HUELGOAT which the leading reconnaissance unit cleared after Grow's Aide, Captain Cyrus Shockey, with one tank, cleard the southern approach to the town. The reconnaissance troops continued west and before the leading elements of CCA reached the town, a large German force moved into the areas from the woods north of HUELGOAT. 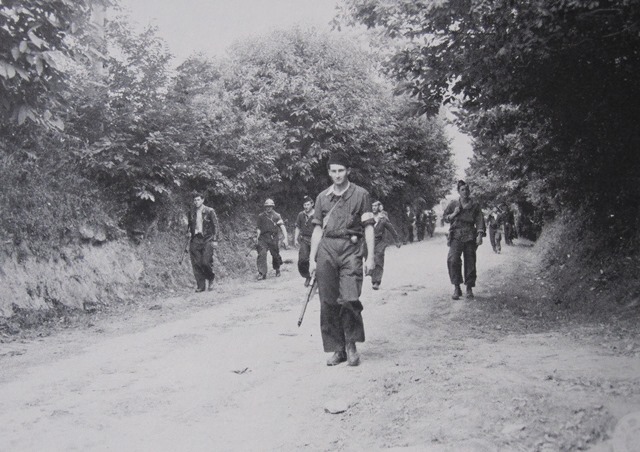 As the 6th AD raced through the Brittany Peninsula, the FFI began to come out in the open.

In accordance whith his policy of keeping the Reserve Command behind the most advanced combat command, the Division Commander had ordered Hanson to switch from following CCB and follow CCA after bypassing CARHAIX. Because of Taylor's timid movement and the new German disposiotion, the Reserve Command would be switched back to CCB but not before some confusion occured, because neither command (CCA and Reserve Command) had knowledge of the other's location. Soon both commands became aware of each other situation's.

Taylor in the meantime became heavily engaged in a rough fight in HUELGOAT and the nearby woods, and Grow was concered that Hanson's advancing column would fire on CCA. Hanson was ordered to keep out of the action. McCorrison moved the 44th Armored Infantry Battalion and two platoons of A Compant, 68th TB, into the southern end of HUELGOAT in two direction, forcing the eneny to withdraw to the north. The resistance became stiff. One of the 68th tanks, fighting in close quarters, was hit by a panzerfaust at close range and set them on fire. The disabled tank was surrounded by the Germans who called on the tankers to surrender. They refused and the Germans opened fire. T/5 Santo Nunziato and Fred Blaylock were cut down by automatic weapons fire. 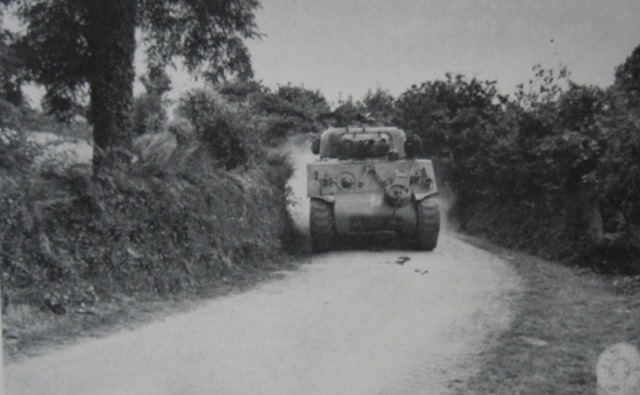 Tanks in the hedgerows were easy prey for the German Panzerfaust