First Lieutenant Vernon L. Edwards, who had been in service for four years, was a member of an armored tank group and trained at Camp Robinson, Arkansas, and Fort Knox, Kentucky. He received his promotion to First Lieutenant in July 1942, and was killed in action at Han-sur-Nied, Lorraine, France. Edwards was a 1936 graduate of Collinsville Township High School, and had been employed by Western Union in St. Louis prior to his induction into service. He was survived by his wife, mother, one son, and two sisters.
About this time Lieutenant Edward's platoon of medium tanks started across the bridge. The fast tank crossed succesfully. The second stalled on the bridge when the platoon commander was hit; for a brief while the tank stood there, Lieutenant Edward's body danling from the open turrent.
Lieutenant Edwards had standing in the open turrent firing a submachine gun. Before he was shot he succeeded in disposing of two German rocket launcher teams. Edwards was awarded the DSC posthumously.
Source: The Lorraine Campaign (book)
Tanks of the 68th rumbling across the span were commanded by 1st Lt. Vernon L. Edwards, Collinsville, Ill., who braved artillery fire, tank and flak guns to help save the bridge by neutralizing two rocket-launcher teams with his machine gun. He was killed by a sniper, leaving the responsibility of tank defense to S/Sgt. Everett H. Tourjee, Catskill, N.Y.
2nd Battalion Officers
source: Paul Warp collection
source: Paul Warp collection
Distinguished Service Cross
Awarded for actions during the World War II
The President of the United States of America, authorized by Act of Congress, July 9, 1918, takes pride in presenting the Distinguished Service Cross (Posthumously) to First Lieutenant (Armor) Vernon L. Edwards (ASN: 0-1011342), United States Army, for extraordinary heroism in connection with military operations against an armed enemy while serving with Company B, 68th Tank Battalion, in action against enemy forces on 12 November 1944. On that date, enemy forces defending the Neid Francaise River withdrew under pressure of an attack by the 6th Armored Division. A vital bridge near Han-sur-Neid, France, remained intact. Lieutenant Edwards, a Platoon Leader of Company B, 68th Tank Battalion, was given the critical mission of crossing with his platoon to establish a bridgehead on the far side. The bridge was under direct fire from small arms, anti-aircraft guns, field artillery and the 88-mm. weapons of enemy Tiger Tanks. Lieutenant Edwards assembled the commanders of his four tanks, briefed them as to the assault and the importance of their mission. Scorning personal danger, he led his platoon onto the bridge, standing in the turret of his tank to direct the attack. Leading the advance Lieutenant Edwards personally destroyed two enemy rocket-launcher teams with machine-gun fire. As his tank approached the enemy end of the bridge, and while firing on an enemy machine-gun position, Lieutenant Edwards was killed by fire of an enemy sniper. First Lieutenant Edwards' outstanding courage, inspirational leadership and supreme devotion to duty at the cost of his life, exemplify the highest traditions of the military forces of the United States and reflect great credit upon himself, his unit, and the United States Army.
General Orders: Headquarters, Third U.S. Army, General Orders No. 6 (January 7, 1945)
Action Date: 12-Nov-44
Service: Army
Rank: First Lieutenant
Company: Company B 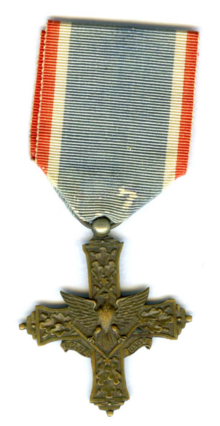 Entered the Service from: New York